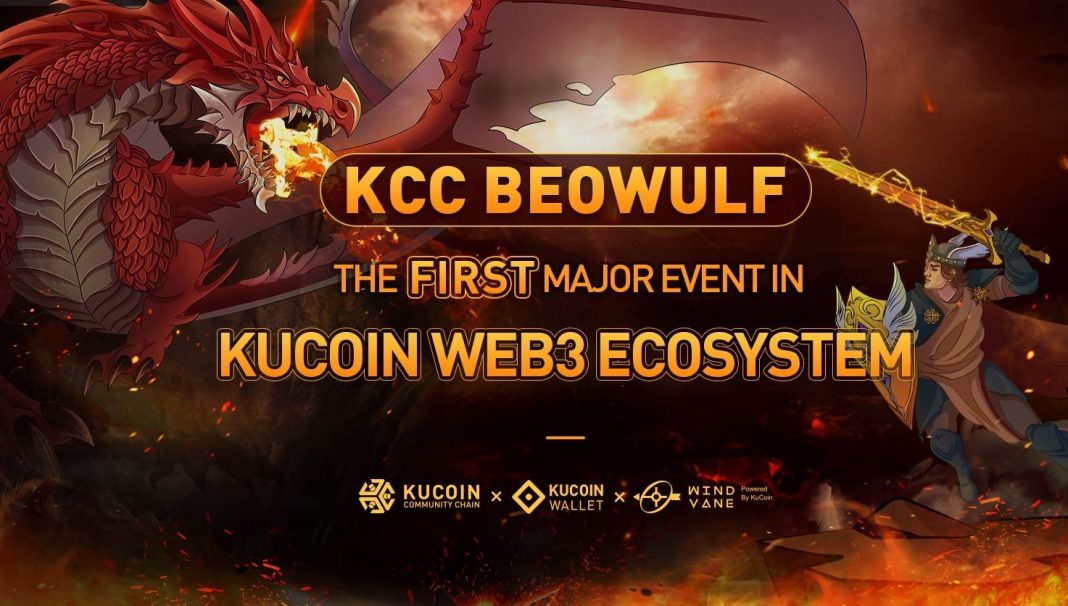 KCC, KuCoin Community Chain, together with KuCoin Wallet and Windvane, announced that they would be holding the first Web3 major event: KCC Beowulf, a seven-week interacting activity. KCC Beowulf will be officially launched during the fifth anniversary of KuCoin. More than 20 projects deployed on KCC, including decentralized exchanges (DEX), lending protocols, wallets, cross-chain bridges and other Web3 protocols will participate.

The KCC Beowulf event is inspired by the epic poem and the nordic hero, Beowulf. Challengers will grow in the KCC Web3 world and fight against dragons by collecting various nonfungible tokens (NFTs). According to KCC officials, the KCC Beowulf event is divided into six parts. First, challengers will all mint an initial character NFT. Then, they will go through four rounds of Web3 project interaction. In the final part, challengers must craft final profile picture NFTs and choose one of two parties. To reward the challenger, Beowulf has also set up a ladder prize pool on top of the basic prize pool, which will be gradually increased as the number of challengers increases.

At the beginning of this year, KuCoin decided to support the development of the Web3 ecosystem. KCC co-released KCS white paper with the KCS Management Foundation and KuCoin on March 29, 2022. The paper notes that the KCS ecosystem will provide more and more sources to support the Web3 ecosystem led by KCC in the future. At the same time, in July 2022, KuCoin secured a $10-million strategic investment from Susquehanna International Group (SIG), one of the largest quantitative trading firms. And it publicly stated that it would use a portion of the funding to support application developers on KCC and expand its product line, such as crypto wallets, decentralized finance (DeFi) projects, NFT platforms, etc. Johnny Lyu, CEO of KuCoin, said in a media interview: “The support of SIG will solidify our leading role as a centralized exchange and facilitate our ecosystem expansion in the decentralized Web3 world.”

Leandre, the core member of the KCC GODAO Foundation, said, “As the first joint event of KuCoin’s Web3 ecosystem, we hope that more users can have their first on-chain experience on KCC in a fun and easy-to-play way. Furthermore, with the migration from Web2 to Web3, decentralized finance will gradually become the main battlefield of finance in the future, and users who participate in KCC Beowulf have the opportunity to become the backbone of the DeFi world.”

KCC is a public chain project initiated and built by KCS’ developer community, solving network latency and high gas fees of the Ethereum network. KCC is Ethereum-based and compatible with the Ethereum Virtual Machine and smart contracts to provide community users and developers higher speeds, more convenience and a lower-cost blockchain experience.